Couple devoted to ethnic history — and each other — die days apart 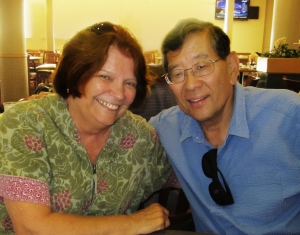 Wayne Maeda (right) and his wife Lorrie Toohey-Maeda (left), both were Sacramento scholars — he at Sacramento State, she at Sacramento City College — died within three days of each other last week, both succumbing to cancer.

Lorrie Toohey-Maeda’s breast cancer had come back, but the longtime Sacramento City College history teacher put off chemo treatments to be with her husband, Wayne Maeda, who was suffering from cancer, too.

“She asked me if she could stop her chemo to take care of Wayne,” said her son Jamey Saltzman. “I was fine with the risks she was willing to take on his behalf because they loved each other so much.”

Wayne Maeda, one of California’s leading voices on Japanese American history, died Feb. 27. His wife, a well-regarded academic in her own right, died three days later.

Their passing is a blow to Sacramento’s ethnic and academic communities: In their careers, Maeda, 65, and Toohey-Maeda, 64, collaborated to tell the story of Japanese Americans in Sacramento and the Delta, according to Greg Mark, director of Asian American studies at California State University, Sacramento.

Mark said that Maeda organized students who pushed for the creation of the program in 1969. “Wayne’s impacted thousands of students who took his classes over 42 years at Sac State. He challenged them intellectually, made them work hard and made them proud of who they were, whether they were Asian American, African American, Indian, Latino or European American.”

Maeda broke new ground with his book, “Changing Dreams and Treasured Memories: A Story of Japanese Americans in the Sacramento Region,” according to Kenji Taguma, editor of Nichi Bei Weekly, the oldest continuous Japanese newspaper in the United States.

The son of Japanese Americans interned at Poston, Ariz., during World War II, Maeda grew up in Dayton, Ohio. He burned with a passion for justice, built bridges between Asian Americans and other disenfranchised people of color and was dedicated to never letting the mistakes of American history be repeated.

“The phrase that sums Wayne up is his email moniker: waymad@csus.edu,” said Christina Fa Mark, an Asian American activist who is married to Greg Mark. “He said it referred to his staying mad as an advocate for Asian American communities. … Wayne stayed ‘mad’ from the ’60s until his last days.”

Taguma said he became a student activist at Sac State in 1991 after stumbling into Maeda’s Asian American studies class by accident.

“When I told him my dad, Noboru Taguma, was one of about 300 Japanese American draft resisters behind barbed wire who refused to serve in the American army unless their families were released and their citizenship restored, his eyes lit up,” Taguma recalled. “For years they had been ostracized by the Japanese American Citizens League because they were thought of as disloyal troublemakers.”

By encouraging Taguma to tell the story of his father and the other resisters and including it in a Sacramento History Museum exhibit, Maeda helped vindicate the resisters. In 2002, the national JACL held a “resisters reconciliation ceremony.”

“I’ve adopted his commitment to historical accuracy as my mantra,” Teguma said. “He was the greatest role model, who lit a fire in me to organize forums on hate crimes following the 1993 racially motivated firebombings in Sacramento.”

The targets were three synagogues and the local offices of the JACL and the NAACP.

Taguma has taken Maeda’s oral history. He said that over the past few months, Wayne Maeda and Lorrie Toohey-Maeda “taught me so much about love, strength and perseverance. She was such a strong, amazing woman, a care giver to the end. While tragic, there’s some beauty in them leaving this world together.”

Toohey-Maeda, a Yurok Indian, was born in Eureka and taught history at Sacramento City College from 1998 to 2012.

She and Maeda became close friends and married in 2008, Saltzman said.

He described Maeda as prickly; Toohey-Maeda loved to laugh, he said. “My favorite nickname for Wayne was Grumpa, but she softened him and that curmudgeon became goofy and poked fun at himself,” Saltzman said. “It was wonderful to behold.”

But when Saltzman once disrespected his mom, “Wayne called me and he was angry – he said under no circumstances did he want me to ever disrespect my mother again,” Saltzman said. “It brought me to tears. I loved the fact my mom had somebody to look after her and I loved the fact she was willing to put her life on the line so he could pass in his home, the way he wanted to pass.”

In 2011, Maeda was diagnosed with Stage 4 bladder cancer and had a kidney and 13 lymph nodes removed in August – the first in a long chain of tragic news for the family, Saltzman said.

“My mother discovered she had breast cancer, and then that September my brother, an alcoholic, killed himself. That November, my mom’s older brother died.”

Satsuka Ina, a longtime friend whose husband has battled cancer, said the four of them would meet to support each other.

“Wayne was firm and very demanding of his students, but he would give those in need money to buy books,” Ina said. “He wasn’t flashy, but he touched many lives with his kindness and inspiration.”

“Lorrie always looked on the bright side, and brought that out in him,” Ina said.

She asked friends to fill their garden with flowers so when he came home from surgery, “he could look out the window and see how loved he was,” Ina recalled.

When Maeda died last Wednesday, “my mom was devastated,” Saltzman said. “I took her to the emergency room Friday in excruciating pain.”

Last November, Toohey-Maeda had taken her son up the California coast to Trinidad, where her grandmother Mary Beech was the last of her Yurok tribe to be born in the old Indian village of Tsurai. “Mary was born in a hut on the beach, and my mom wanted to be buried in Trinidad with Wayne,” Saltzman said.

“Together, they were greater than the sum of their parts.”

Known For: Helped found Asian American studies and ethnic studies at California State University, Sacramento, where he taught for 42 years; author of “Changing Dreams and Treasured Memories: A Story of Japanese Americans in the Sacramento Region”

Services: A joint service will be at 3 p.m. Friday, Buddhist Church of Sacramento-Betsuin, 2401 Riverside Blvd. A potluck reception will be held after the memorial.

This entry was posted in Uncategorized. Bookmark the permalink.